Though perhaps only well known among balletomanes, Le Spectre de la Rose is a particular kind of gem for 20th-Century ballet. Choreographed by Michel Fokine with music by Carl Maria von Weber (“Invitation to the Waltz”) and costumes by Leon Bakst, the libretto (story) is based on the choreographic poem by Theophile Gautier. This under-ten-minutes ballet paints a prolific story between a young girl and a rose come to life. The ballet premiered in 1911 with the Ballets Russes de Monte Carlo. Vaslav Nijinsky danced the part of the Rose, and Tamara Karsavina danced the role of the Young Girl. It was well received and became an immediate success. The most iconic moment is the conclusion of the ballet, when the Rose leaps out of the window, made famous and an expectation by Nijinsky’s reputation for agility and allegro work. Other significant dancers including Rudolf Nureyev and Mikhail Baryshnikov.

But what is this “spark notes” ballet about?

The libretto is inspired by the choreographic poetry of Theophile Gautier, specifically Gautier’s verse “I am the spirit of a rose you wore at the ball yesterday” (Je suis le spectre d’une rose que tu portais hier au bal). So, the story follows a young lady who has just returned from a ball and with a single rose in her hand, dreams of the rose which comes to life. She dances with the rose and yet at the end, the rose leaps through the open window before she awakes. When she wakes, the single rose has slipped from her fingers and lays on the floor before her.

The ballet incorporates waltz steps, attitude and arabesque turns, and much petite and medium allegro work. Although there are many identifiable technical steps throughout the piece, the ballet also reflects Fokine’s objectives as a choreographer and member of the dance community. As was on-brand for notable contemporaries of his, Fokine believed that ballet was due for a rebranding. He believed that movement needed to be more fluid, less rigid within the technique, and should in general break free of its mold to marry all elements of creative work (music, theatre, visual effects, etc.). He also believed in the importance of the full body’s involvement in gestures to convey the full picture whether in telling the story or completing a set of steps.

Though not as common on the average company season, Spectre has been restaged and revisited over time, including a 1979 parody by Maurice Béjart, Harald Lander’s restaging during his tenure at the Royal Danish Ballet in the 1930s, and a 2009 reimagining by Marco Goecke for the Ballets Russes in its present form.

Learn more about the significance of this ballet and the artists involved here, here, and here! To learn more about Michel Fokine and his choreography, read this write-up through ABT here.

Save the date for Sips and Clips on Sunday, April 24th at 3:30 pm ET on Zoom! We’ll not only watch Spectre but also other pieces from the Ballets Russes’ repertoire! See you there! 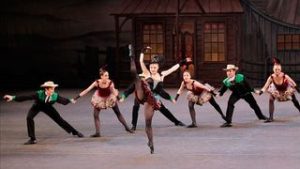 Paquita – A brief history of this classical ballet.

Happy March everybody! With Spring maybe, possibly, hopefully, just around the corner, we have turned our attention to this month’s Cardio Ballet theme, Paquita. A